Encouraging microorganisms that improve the soil 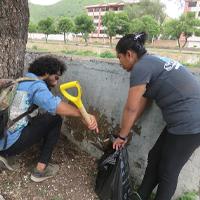 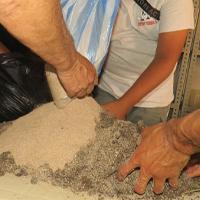 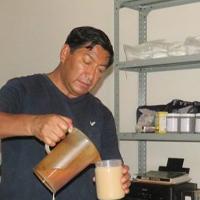 I learned from Ing. Abrahán Mujica how you can culture your own microorganisms, using some simple equipment and a few inexpensive ingredients. Abrahán showed me and a small group at his agroecology course that you can start by collecting some leaf litter. We gathered the leaves and topsoil from the base of two or three molle (Schinus mole) trees in the city of Cochabamba.

We put some 5 kilos of leaf litter and black soil on a plastic table. We added a kilo of raw sugar and a kilo of bran (rich in proteins), to feed the microorganisms, and just enough water to turn the mix to a paste. It should be just moist enough that it will release a couple of drops when you press it in your hand

As we mixed up the ingredients, a smell like bread yeast soon filled the room.

“Smell the yeast!” Abrahán said. “The yeast are the first microorganisms to respond to the sugar.”

“Not just yeast,” I said. “There must be 10,000 species of microbes in there.” Abrahán happily agreed.

We filled a third of a 20-liter bucket with this paste, and covered it with plastic bags, tied on with a rubber tie, to keep out the air. The mix will rot if it is exposed to the air, Abrahán stressed. Fermentation is without oxygen.

After a month, Abrahán will mix the fermented paste with water in a 200-liter barrel, seal it again for another month, and then drain off the water, which by then will be full of microorganisms.

He filters this solution through an ordinary cloth and bottles the liquid for sale. The label reads “The Life of the Soil”. It can be sprayed on the soil to make it healthier, or added to compost to speed up decomposition, or used as fertilizer on plant leaves. He said it is intended mainly for soil that has been killed by pesticides, to bring the soil back to life.

Abrahán’s home also doubles as a small shop, where he sells liquid smoke distilled during charcoal making—which is mixed with water and sprayed onto crops as natural insect and fungus control. He also makes and sells other such products for protecting plants without toxic chemicals.

Although Abrahán makes the products he sells, he is happy to teach others. On his agroecology course, he teaches others his trade secrets about how to make each product.

There will always be lots of people who don’t want to mix these brews. And those who do make their own will also help to make the world a better place, by reducing the use of toxic pesticides, which Abrahán explains are a danger to farmers and consumers.