Home › The Fate of Food

The Fate of Food 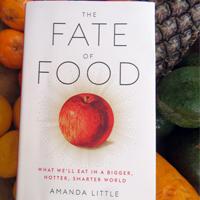 In ‘The Fate of Food’, Amanda Little (professor of journalism and science writing at Vanderbilt University) takes us on a strange journey to the cutting edge of agricultural research. Little has an astonishing knack for getting quality face time with some of the most innovative (and busy) people in the science of food.

She takes us to Shanghai to meet Tony Zhang, an entrepreneur who dreamed of being the Whole Foods (grocery store chain) of China. Zhang was so enraged when he found out that his vegetable farmers were growing special plots of organic produce just for their own families, while selling produce tainted with pesticides, that he created his own 4,000 hectare farm where he monitored his crops with electronic soil sensors that captured data on soil moisture and temperature, acidity and light absorption.

The cost of managing the data and cleaning the heavily polluted soil eventually led Zhang to quit farming, but other companies continue to improve his idea of the digitalized soil sensors.

In Silicon Valley, Indian cardiologist Uma Valeti leads a startup that is culturing meat in the lab. It’s real meat, just grown in a Petri dish, not in an animal’s body. Little finds the duck meat tasty, although at over $100,000 a serving, it’s still not commercial. But costs are falling.

In Norway, commercial salmon grower Alf-Helge Aarskog is growing the fish in cages in the seawater of a fjord. Fish farmers are racing to invent technology fast enough to solve their emerging problems. Captive salmon were once fed wild sea creatures, but the diet is now 75% grain, with the goal of creating a completely vegetarian, cultivated fare.

The dense populations of penned fish are a breeding ground for “sea lice,” a crustacean parasite of salmon. Aarskog is using a robot that can spot the sea lice and zap them with a laser as the fish dart through the water.

Robots are the newest farm workers on dry land as well. Peruvian engineer Jorge Heraud and colleagues in California have invented a “lettuce bot” that can thin a field by recognizing when seedlings are too dense and kill the extra plants with a precision over-dose of chemical fertilizer. John Deere sees enough promise in the idea that the corporation recently bought Heraud’s company for $305 million.

In the USA, most lettuce is grown in California in the summer, and around Yuma, Arizona in the winter, a continent away from the big consumer markets of the East Coast. Former Cornell professor Ed Harwood and colleagues have solved this problem by growing aeroponic lettuce in an old building in Newark, New Jersey, where the plants grow under LED lights, without soil.

The lettuce is marketable after 12 to 16 days instead of 30 or 45, and the plants yield four times as much as in the open field. The lettuce is grown on trays stacked high, so the yield per hectare can be 390 times as high as in a conventional farm.

The book is crowded with insights. For example, drip irrigation was invented in the 1930s by Simcha Blass, an Israeli engineer, after he observed a tree growing big and lush in the desert, thanks to a nearby, overlooked leaking faucet.

Little is also cautious about some recent innovations; 90% of the maize, soy and cotton grown in the USA now is genetically modified, mostly to be grown with high doses of herbicides. Pigweed has now evolved resistance to the herbicides and infests 70 million acres (28 million hectares) in the United States.

According to professor Calestous Juma, innovations often look awkward at first; it took years for the farm tractor to become agile enough to really compete with horses. It’s hard to tell which of the innovations that Little describes will produce the food of the future. But big data, robots and more indoor farming may all be here to stay.

Little starts and closes her book with a vignette about Chris and Annie Newman, a young couple in Northern Virginia raising pigs and chickens, and fruit and nut trees, with permaculture. The Newmans are pro-environment and pro-technology; they look forward to the day when they can use weeding robots on their farm. It’s just possible that digital technology of the future might tempt more young people to invest in highly productive, organic family farming.

Forecasting the weather with an app

© Copyright The Fate of Food