Promoting agroecology in a biodiversity hotspot 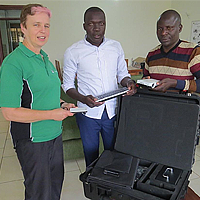 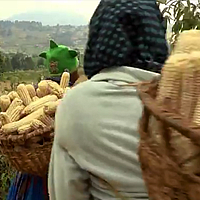 The Greater Mahale Ecosystem (GME) with its stunning views and fascinating wildlife along the shores of Lake Tanganyika – the world's longest freshwater lake – must be an exciting region to visit in western Tanzania.

Considered as an important biodiversity hotspot, GME accounts for 90% of Tanzania’s endangered chimpanzees and over 250 endemic fish species. It is also home to colobus monkeys, giant forest squirrels, numerous bird species and several plant species that are only found in this region.

But the remoteness of this region – with limited road network, electricity and internet – makes it a tough place to work. It is also a big challenge for rural communities, who depend on agriculture for their livelihood, to improve crop productivity to meet the increasing demand for food without damaging the valuable ecosystem.

“The promotion of sustainable agriculture is vital to protect the rich biodiversity in GME, while ensuring food security,” said Asheri Stephen Lemelo, who has been introducing good agricultural practices to farmers in Kigoma region using Access Agriculture training videos in Kiswahili language, after seeing the decrease in soil fertility caused by unsustainable practices.

Since 2012, Asheri has been the Executive Secretary of Inua Jamii Group (Lifting-Up the Community Group) which operates in the region to empower poor and disadvantaged communities, especially women and youth, to realise their full potential.

Thanks to the solar-powered smart projector he received from Access Agriculture, he can show all the training videos in remote villages that have no electricity or internet.

Most of the videos shown by Asheri relate to maize production and processing as maize is the most popular food crop in this region. He also shows videos on cassava, beans, groundnuts, rice, vegetables, livestock and poultry as well as on organising self-help groups, among others.

“In 2020, I was able to reach about 5000 farmers in Uvinza district, Kigoma region, despite the COVID-19 pandemic,” he said. “My biggest achievement was that farmers, who watched the training videos and applied the ideas, were able to double their maize crop yields from 10 sacks per hectare to 20 sacks. As a result, many marriages are now free of conflicts since there is more food and income in households.”

Asheri is still trying hard to make a viable business from showing farmer training videos, as smallholder farmers in his region are quite poor and often cannot pay him for watching the videos. Despite this, he remains committed to sharing new knowledge on good agricultural practices with farmers.

He is pleased that young people are increasingly showing interest and are seeing agriculture as an opportunity. “Young people are more excited about technology and are highly motivated by the videos. They can understand better the principles and techniques of sustainable farming shown in the videos than the older generation.”