Home › Staying grounded while on the air in Ghana

Staying grounded while on the air in Ghana 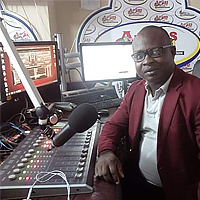 It’s a simple matter to play a soundtrack about farming on the radio. The tricky part is making sure that the program connects with the audience, as I learned recently from Gideon Kwame Sarkodie Osei at ADARS FM, a commercial station in Kintampo, a town in central Ghana.

Since 2010 Gideon has been pleased to be part of an effort by Farm Radio International (FRI) that supported radio stations in Ghana, including ADARS FM, to reach out to farmers. With encouragement from FRI, Gideon started a weekly magazine show for farmers, where he plays Access Agriculture audio tracks. The magazine, Akuafo Mo, means “Thank You Farmers” in the Twi language.

Before he started the show, Gideon (together with FRI) did a baseline study of the farmers in his audience. He found that they had more time on Monday evenings. Farm women do more work and have less time than most people, but they told Gideon that they were usually done with their chores by 8 PM, so that’s when he airs Akuafo Mo, every Monday for an hour.

The show starts with recorded interviews, where farmers explain their own knowledge of a certain topic, like aflatoxin, which is so important that Gideon had several episodes on this hidden toxin that can contaminate stored foodstuffs. After the interviews, Gideon plays an audio track, to share fresh ideas with his audience. Gideon has played Access Agriculture audios so often he can’t remember how many he has played. “It’s a lot more than 50,” he explains.

Gideon plays a portion of the audio in English, and then he stops to translate that part into Twi, the language of the Ashanti people. Every week there is a guest on the show, an extension agent who can discuss the topic and take questions from listeners who call in.

Gideon’s experience with the magazine inspired him to start listener groups, in coordination with FRI. Visiting listener communities, Gideon found that some did not have a radio set. So, with project support, he bought them one. “We give them radio sets so they can come together weekly and listen to the magazine,” Gideon told me. He has 20 groups, each with 12 to 30 people. Five groups are only for women, especially in areas where males and females don’t casually mingle. The other listener groups have men and women.

Gideon visits at least some of the groups every week. Because of these visits, Gideon is now downloading videos as well as audio from Access Agriculture. “Sometimes I see if they have electricity, and I rent a projector, to show them the video they have heard on the air.” Gideon says. “This is my initiative, going the extra mile.”

Some of the farmers are learning to sell their groundnuts, maize and other cereals as a group, netting them extra money and helping them to be self-sustaining.

Gideon is also a trainer for FRI. Before Covid, he would travel to other towns and cities in Ghana, meet other broadcasters, and go to the field with them to show them how to improve their interview skills and to craft their own magazine shows. Now he continues to train broadcasters, but online.

Working with the farmer listening groups gives Gideon insights into farmers’ needs and knowledge, making his magazine so authentic that 60,000 people tune in. That experience gives Gideon the confidence to train other broadcasters all over Ghana.

When I was in Ghana a few years ago, I met excellent extension agents who told me how frustrated they were to be responsible for reaching 3,000 farmers. It was impossible to have a quality interaction with all those farmers. However, there are ways to communicate a thoughtful message with a large audience, for example with a good radio magazine.

Gideon has creatively blended his own expertise with resources from two communication-oriented non-profit organisations: Farm Radio International and Access Agriculture. Hopefully, his experience will inspire other broadcasters.

© Copyright STAYING GROUNDED WHILE ON THE AIR IN GHANA