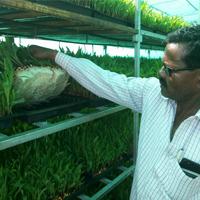 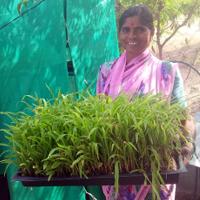 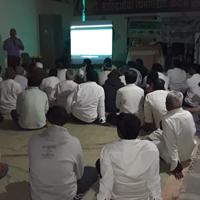 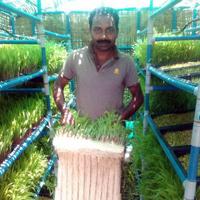 Hydroponic farming – a system where plants are grown in water instead of soil – seems too high-tech and costly for smallholders in developing countries. But dairy farmers in the Satara district in the Indian state of Maharashtra have in recent years learnt to successfully produce quality green fodder using a simple low-cost hydroponic system.

Green fodder is vital to feed livestock. But because of the growing pressure on land and water, producing sufficient green fodder throughout the year is a big challenge to meet the requirements of the huge livestock population of India. According to the Indian Grassland and Fodder Research Institute, India faces a deficit of over 11% in the availability of green fodder.

As hydroponic fodder is grown on trays that are stacked on a rack, it requires significantly less land than conventional farming. It also uses less water and labour. Hydroponic fodder is thus a viable option for growers with limited access to land and water and in arid, semi-arid and urban areas.

The yields are much higher in the hydroponic system as plants grow faster than in the traditional system. For instance, it takes only about a week to develop hydroponic fodder compared to 45-60 days for traditional fodder. Moreover, it can be produced throughout the year, including the dry season, and does not require any chemicals or pesticides.

According to Dr Shantaram Gaikwad, General Manager at Govind Milk and Milk Products company based in Satara, which is located in the milk belt of Maharashtra, the production of hydroponic fodder in low-cost greenhouses is an effective solution for fodder scarcity and is a very promising technology for sustainable livestock production in India.

In consultation with experts from the Indian Council of Agricultural Research (ICAR), Govind has been a pioneer in developing low-cost greenhouses using locally available material for producing quality hydroponic fodder. It is introducing improved technologies to dairy farmers in Satara in line with its sustainable dairy development strategy.

As part of this, Govind has been consistently using the Access Agriculture video “Hydroponic fodder” in its farmer training programme. “Based on its average number of trainees (about 5,000 per year), we can say that our video has reached around 15,000 farmers until now,” said Atul Pagar, freelance documentary filmmaker and videographer, who has produced this video for Access Agriculture (www.accessagriculture.org).

“The trainers from Govind use a van with LED display that travels through villages every day to show farmer training videos, including ours. They have also shared our video link through their social media channels,” Atul added.

According to Dr Gaikwad, the adoption of the low-tech hydroponic fodder system by smallholder dairy farmers in Satara is a big success story for Govind. “Farmers want technology, but in their own way. The technology should be simple, affordable and can be made with local resources,” he said.