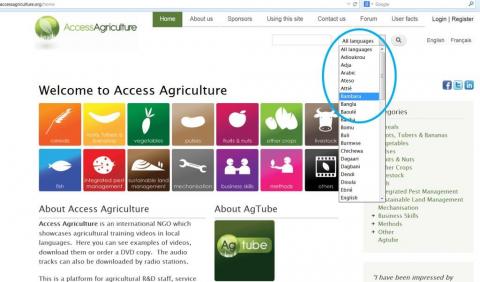 Based upon demand Access Agriculture translates any video available on its website into any language. To respond to the increased demand for local language translations, Access Agriculture continues to invest in networking and building capacities of local media and communication professionals.

In less than two years since the NGO was established, videos are already available in more than 50 languages. “This is an important milestone as it shows how organisations increasingly see the value of supporting South-South exchange between farmers,” says its Executive Secretary, Bob Muchina, based at the Access Agriculture head office in Nairobi.

The website facilitates an easy search on language, so by selecting the language from the drop down menu and doing a search, all videos available in that particular language will show up.

“Our service of translating videos into local languages is becoming more popular as organisations increasingly consider economies of scale: it is much cheaper to have a video translated than to have a new one made,” concludes Mr. Muchina.

Read the blog Translate to innovate