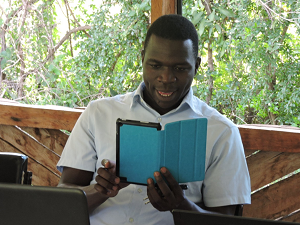 Access Agriculture has reached more than 68 million farmers through its videos and audio soundtracks.  An on-line survey, just finalised, involved participants from 115 countries.  Two thirds of users are watching the videos direct on the site with one third registering and downloading.

Most people using the site are sharing the videos either directly with farmers or with colleagues involved in extension. Users like Access Agriculture so much, that 900 of those who took the survey shared the platform with other organisations.

From the 2,210 people who took part in the survey 80% have learned about Access Agriculture in the past three years. 78% of participants were from Africa and most were male. More half are younger than 40.

Two thirds of those surveyed have watched more than 5 videos. Downloads of factsheets and other impact studies and publications were popular with around 30% of users.

Many inspiring trainers are finding good uses for the videos, from Dominic Kinuthia a farmer and educator from Kenya who says: “I every now and then get an opportunity to train bankers on various aspects of agriculture in view of financing the sector.”

In Papua New Guinea, Lily Sar gave this feedback: “I find your videos very easy to follow. And know that farmers in rural communities also identify with the messages, in particular those associated with indigenous farmer knowledge.” None of the videos were filmed in Papua New Guinea, but Access Agriculture videos often capture global issues that many farmers can relate to.

Meanwhile the videos have been used in Burundi by Oscar Rwasa a consultant trainer who says: “I used videos to coach youth entrepreneurship within agrobusiness projects.”

Some good suggestions for improving the Access Agriculture website and publicising the sister platform www.Agtube.org were mentioned. These will be introduced in the coming months.

Those who completed the survey were entered into a draw to win a Digisoft smart projector that contains the entire video library off-line and off grid. The winner is David Olubiyi Ojo from Nigeria.  We will follow up on how he uses the smart projector at the training centre where he is based.