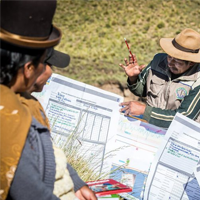 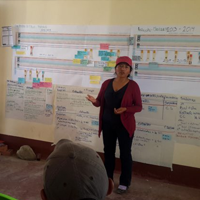 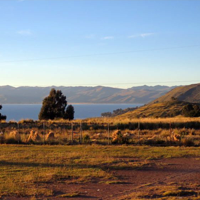 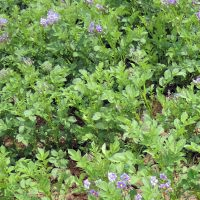 Yapuchiris are expert farmer-researcher-extensionists on the semi-arid, high plains of Bolivia. At 4000 meters above sea level (over 13,000 feet), seasoned farmers know how to observe plants and animals, clouds and stars, to predict the weather, especially to answer the Big Question on their minds: when will the rains start, so I can plant my crop?

All of the yapuchiris know some traditional ways of predicting the weather. Some yapuchiris also write their observations on a special chart they have designed with their agronomist colleagues at Prosuco, an organization in La Paz. The chart, called a Pachagrama, allows the yapuchiris to record the weather each day of the year, just by penciling in a few dots, so they can see if their predictions come true, and how the rains, frosts and hail affect their crops.

It can be daunting to prove the value of local knowledge, but it is worth trying.

Eleodoro Baldivieso is an agronomist with Prosuco, which has spent much of the past year studying the results of the Pachagrama weather-tracking charts. As he explained to me recently, Prosuco took four complete Pachagramas (each one filled out over seven years) containing 42 cases; each case is a field observed over a single season by one of the yapuchiris. Comparing the predicted weather with the recorded weather allowed Prosuco to see if the Pachagramas had helped to manage risk, mainly by planting a couple of weeks early, on time, or two weeks late.

Frost, hail and unpredictable rainfall are the three main weather risks to the potato and quinoa crops on the Altiplano. In October, a little rain falls, hopefully enough to plant a crop, followed by more rain in the following months. Average annual rainfall is only 800 mm (about 30 inches) in the northern Altiplano, and a dry year can destroy the crop.

For the 42 cases the study compared the yapuchiri’s judgement on the harvest (poor, regular, or good) with extreme weather events (like frost), and the planting date (early, middle or late) to see if variations in the planting date (based on weather predictions) helped to avoid losses and bring in a harvest.

The study found that crops planted two weeks apart can suffer damage at different growth stages of the plant. For example, problems with rainfall are especially risky soon after potatoes are planted, affecting crops planted early and mid-season. Frost is more of a risk for early potatoes at the start of the season, and for late potatoes when they are flowering. Hail is devastating when it falls as the mid and late planted potatoes are flowering.

The yapuchiris are often able to accurately predict frost, hail, and rainfall patterns months in advance. Scientific meteorology does a good job predicting such weather a few days away, but not several months in advance. When you plant your potatoes, modern forecasts cannot tell you what the weather will be like when the crop is flowering.

Forecasting the weather in a challenging environment is helpful, at least some of the time. Planting two weeks early or two weeks late may help farmers take best advantage of the rain, but then expose the crop to frost or hail. Changing the planting dates can help farmers avoid one risk, but not another.

The weather is so complicated that risk can never be completely managed. And because scientific meteorology cannot predict hail and frost months in advance, local knowledge fills a void that science may never replace.

Cultivating pride in the Andes

To see the future