Home › An ingenious idea to expand business by helping farmers

An ingenious idea to expand business by helping farmers 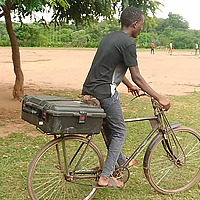 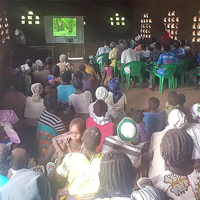 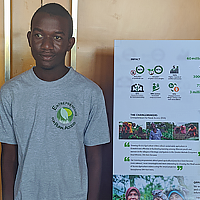 We can easily see the truth of the maxim “necessity is the mother of invention” – or rather “ingenuity” in the case of Osman Majid, a young video dealer, locally known as a Deejay (DJ), who lives in Nathenje, a small town on the outskirts of Malawi. Unlike most other DJs, Osman has quickly expanded his video business and created a new customer base by screening farmer-training videos and sharing the videos on phones.

“Farmers pay to watch the training videos when I screen them and most of them like the videos as they are translated into Chichewa – the language we speak here,” said Osman. “I take note when they show interest and direct them to my video burning centre where they pay to get those videos transferred on their phones.”

The local DJs usually put videos (mainly movies or music) on people’s cell phones and on DVDs in their video burning centres for customers who watch the videos in the evenings with their families and friends.

Osman is among the 95 DJs in southern Malawi, who received a set of DVDs containing farmer-learning videos in English and other languages of Malawi (Chichewa/Nyanja, Yao, Sena and Tumbuka) from Access Agriculture (www.accessagriculture.org) in 2015 and were encouraged to sell these videos to farmer customers. “I am the only one around here selling farmer-training videos, so people come from far to collect the videos,” said Osman.

Seeing the growing interest of farmers in these training videos, Osman responded to the Access Agriculture ‘Young Entrepreneur Challenge Fund’ call in 2019 with an innovative business proposal to screen the videos in Nathenje and surrounding areas. He was one of the winners of the Challenge Fund competition, called “Entrepreneurs for Rural Access (ERA)” and was awarded a solar-powered smart projector containing all Access Agriculture farmer-training videos.

Osman said that despite the COVID-19 pandemic, he was able to show about 80 training videos to more than 2000 people last year and the number of customers who requested copies of agriculture videos has increased considerably. “With the smart projector it is now easy to go to villages where electricity is not available.”

According to him, the most popular videos both for showing and sharing with the farmers were the following:

Osman is very happy that when he showed the video on ‘Making yoghurt at home’ in a village called Pata, the villagers learnt to make yoghurt and have started a business.  “Most of them did not know how to make yoghurt, but now they are selling yoghurt after watching the videos.”

He is also pleased that the videos are helping the farming community in his area to learn agricultural techniques from different countries. “It is encouraging to see young men and women eager to practice the techniques. When they ask questions from the videos watched, I refer them to extension officers within the community.”

He would like many more videos to be translated into Chichewa/Nyanja, as farmers in his area need access to the best practices available relating to agriculture, food processing and entrepreneurship.

“My reputation has reached many areas in Nathenje. I am hoping that COVID-19 will end so that I can increase coverage,” Osman reported. He is increasingly receiving requests for video shows from community-based organisations, NGOs like Agrinet Agriculture in Malawi, and the Area Development Committee.

He has introduced his service to local authorities, who have permitted him to freely use government facilities, such as schools, to screen farmer-training videos. Based on his experience as ERA, he is now mentoring over 35 new ERAs, who have just been selected in Malawi.

As can be seen from Osman’s example, Africa’s young people are enterprising and enthusiastic users of digital technologies and have their hands full to respond to the growing demand for quality advisory services. Their innovative spirit can be harnessed to promote rural development while presenting them with a viable opportunity to become valuable service providers and earn a decent living.