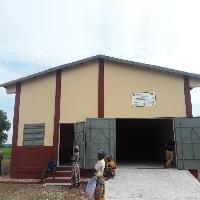 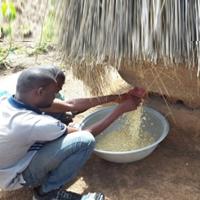 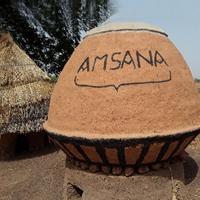 Timely harvest is important to avoid losses. This is an important lesson that farmers in Benin learnt from videos on improved harvest and post-harvest practices for maize and cowpea as part of training programmes organised by Iles de Paix (Islands of Peace), a Belgian NGO.

The Iles de Paix team in Benin uses Access Agriculture farmer-learning videos in French and in the local ‘Dendi’ language to train its targeted farming communities, sharing information on good agricultural practices. Since 2016, 80 farmer-trainers including women, have been trained every year and they in turn are using the videos to teach their peers.

Now their lessons are bearing fruit. Some of the farmers said that before the training they used to lose half their maize crop mostly due to delayed harvesting and improper drying and storing. But after the training by adopting improved practices, such as timely harvest and proper post-harvest management and storage of the produce, the farmers reported that they had hardly any loss.

“Earlier I used to harvest 8 to 10 bags of maize from my half hectare field, but I used to always lose at least 3 bags out of 10. Last year by fertilising with compost, I got a yield of 14 bags. I did not lose any of them as I followed all the recommended harvest and post-harvest techniques,” said Mathieu Tchanati from Koukouatougou village, Boukombé commune in north-western Benin.

André Yantekoua from Dipoli village in Boukombé commune happily recalled that he was able to sell 15 bags of maize at 23 Euro per bag this season. “The money earned from this allowed me not only to take care of my family’s needs, but also buy supplies for the next cropping season.” He was also able to train 33 other farmers in improved techniques.

Boniface Nara from Matéri village of Fékérou commune explained that. “Thanks to the application of good practices, we no longer have crop losses from the field to the house. From the sale of the harvest, I was able to build a house, and other farmers whom I trained were able to buy draft animals.”

By partnering with Access Agriculture and using its videos to share information with smallholders, Iles de Paix is helping farmers learn sustainable farming practices. Even if you are not an Access Agriculture partner, you can still watch, download and share our videos for free. They cover many topics to improve the lives of the rural poor!

The harvest and post-harvest videos are available in English and other languages, besides French and Dendi.

Harvesting maize in a good way