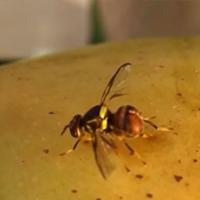 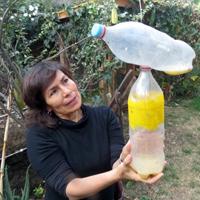 The Mediterranean fruit fly is a worthy enemy. This pest, also known as the medfly, is widespread over the tropics, attacking and spoiling oranges, mangoes and many other fruits. Each female can lay 200 eggs in her brief lifetime—allowing rapid population growth. The medfly damages so much high value fruit, that many people would like to eradicate it entirely.

The medfly has inspired some bizarre responses, such as spraying suburban Los Angeles with Malathion (insecticide) in the 1980s. Then there is the sterile male technique, which has been used from South America to South Africa to the US citrus belt, where billion of the flies are reared in labs, and treated with enough nuclear radiation to make the males sterile.

These hapless males are then dropped from airplanes to mate with wild females, who then have no offspring. These programs to eradicate fruit flies over all of Guatemala, for example, are often described as successful, cost-effective and environmentally friendly. They are also large, expensive and highly technical affairs.

Low technology has also been tried. In Bolivia, the soda pop bottle trap has been around for perhaps 20 years, although it has not been widely adopted. You take a plastic drink bottle, punch some fly-sized holes in the side, pour in half a cup of orange juice and hang the bottle from an orchard tree, about shoulder height. The flies come for the juice, fly into the hole, but usually can’t find their way out of the bottle again and drown in the juice.

It’s fine in theory, but when I saw the traps being used in the field, the farmers had quickly given up on them, allowing the orange juice to decay to a black rot. The farmers had tried a trap or two and abandoned the idea. The traps may have needed some further tweaking.

Our personal battle with the medfly began three years ago, when we couldn’t get them out of our guava tree. Entomologist Luis Crespo told us that the flies love guava so much that peach growers have to cut down their guava trees as a first step to managing the pest. But Luis kindly gave us a pheromone trap, which attracts flies with a sexual scent lure. The flies land on the trap’s sticky surface and die.

Pheromones typically trap one particular species of fly, but we had several, and by then the soil around our guava tree was full of pupating and highly fertile fruit flies. We reluctantly pruned our guava so it wouldn’t bear fruit, but by last year we were getting fruit fly larvae in our tomatoes and even in our avocados, (not a major fruit fly host).

The war was on. We loathed the thought of fruit flies in our avocados, and this was our last chance to stamp out the fly. We uprooted all our tomatoes. My wife Ana, and her dad made dozens of traps. Even a technology made from a pop bottle can evolve. We had seen improved models displayed by students at the local fair sponsored by the agricultural college.

You can make a better trap by painting a yellow stripe around the entry holes. Fruit flies are attracted to the colour yellow. Take two bottles and make a T-shaped trap. As the flies ascend from the juice to the top of the bottle, they fly into the second bottle and cannot find their way out again. During the mild winter, we may have two to four flies in each pop bottle trap, while the old traps made from a single bottle would catch one or two medflies.

It seemed like a waste to squeeze fresh juice for flies, but we learned with experience that even when the orange juice was a month old, the fruit flies still swarmed to it because they are attracted to fermenting fruits and vegetables.

Traps might also work in a commercial orchard, if you could get hundreds of pop bottles. People are starting to manufacture yellow traps and there are alternative baits (like chicha, a local, low-alcohol brew, which is already fermented and easier to get than orange juice).

In spite of our improvements, one has to attack fruit flies with several weapons at once. Our traps are better for monitoring than for total fruit fly control. If not for the Covid lockdown, we would buy some low-toxic insecticide to make more lethal food traps. And we won’t know until our next avocado crop comes in if we have eradicated our fruit flies or not, but at least we have a better fly trap.

The Mediterranean fruit fly is Ceratitis capitata, but other fruit fly genera in Bolivia include Anastrepha and Bactrocera.

Guardians of the mango