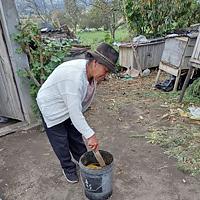 Lifeless soil, worn out by years of tillage and chemical fertilizer, can be brought back to good health with the help of beneficial micro-organisms. A video on that topic, “Good microbes for plants and soil”, tells how to make a liquid, which is rich in beneficial microbes, that you can apply to your soil and crops. It was filmed in India and is now available in 23 languages, including Spanish.

Diego Mina and Mayra Coro are researchers working closely with smallholder communities in the province of Cotopaxi, Ecuador, where they showed the Spanish version of the microbe video to several groups. Then, Diego and Mayra sent the video to each farmer on WhatsApp, and followed up with a demonstration, where they mixed raw sugar, cow urine, manure and legume flour in a bucket, and fermented it.

One of those farmers was Blanca Chancusig, who has a small farm with maize and guinea pigs, rabbits, a pig and a few dairy cows. Doña Blanca explained how she strained the mix and poured it into recycled plastic bottles. She mixed one liter to 10 liters of water and sprayed it on her maize and lupine crop. She likes the results so much that she’s now making it on her own. “We have all of the ingredients,” she says.

The recipe in the video calls for chickpea flour, which is common in India, but rare in Ecuador. So, Diego and Mayra adapted, explaining to farmers that they could use the flour of any legume, such as broad bean.

“The broad bean flour was the only ingredient we didn’t have,” doña Blanca explained, “but we found some.” A year after doña Blanca had seen the Indian video, she was still cultivating good microbes on her own, in Ecuador.

I was in Ecuador with Paul and Marcella, filming a video on beneficial insects, featuring doña Blanca and other farmers. We asked her what she thought about watching a video with farmers from other countries. “I thought it was great. I learned a lot,” she said.

As this example shows, as long as videos are well made, explain principles and are translated into local languages, farmers can learn from innovative smallholders in other countries. Creative agronomists can also facilitate videos, sharing them and helping farmers adapt concepts. In some ways, it makes more sense to share videos from different countries than from one’s own country, because the ideas are more novel.

In February, we were in Ecuador filming a video on flowering plants to encourage beneficial insects. It is now available in English, French, Kichwa and Spanish, and there may soon be versions in languages of India, which will let South Asian farmers enjoy learning from farmers in South America.

Flowering plants attract the insects that help us

The wasp that protects our crops